Why We Moved To Cleveland During Christmas Break

This is a true story as far as you can tell. It began eight years ago. My son, Ryan, was home from college on Christmas 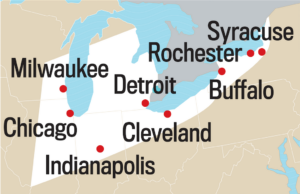 break. We lived in Joliet, Illinois at the time. He was a freshman attending Cleveland State University which is five hours and 17 minutes (356.9 miles) to the east. It was an exciting time for me and my family. Our boy was home. He was enjoying school. A philosophy major, I couldn’t be prouder!

Everyone was invited to our house on Christmas Eve. This included Ryan’s siblings, some friends from high school, his uncles, aunts, grandparents, girlfriend, the whole nine yards! My wife made chicken casserole and we all sat around telling stories. Ryan told us that he found the Cleveland Cavaliers much more exciting than the Chicago Bulls. This revelation made Ryan’s grandpa fall right out of his chair. But after paramedics revived him we all had a good laugh. After all, Ryan was an adult and we had always encouraged him to follow his heart, even if that meant going against everything the family stood for.

As was customary, we gathered everyone around the fireplace at midnight. I was to read “The Night Before Christmas” by Clement Clark Moore. It had been a family tradition dating back to 1924 according to Ryan’s grandpa — yes, the very one that fell out of his chair. Ryan had always enjoyed hearing the poem. I remember he used to jump into my lap (even on Easter) and scream, “Daddy, read the Christmas story, read the Christmas story!” Well, that was when he was a young boy. But, still, I didn’t expect to see the disappointment in Ryan’s face – this now 18-year-old man – when I cracked open what was once his favorite and very worn book.

“It’s just what, son? You can tell me anything!”

“I was hoping you could read this instead.”

“I eat there all the time, Dad. It’s a different kind of pizza place, very huge in Cleveland. I can live without philosophy, history, and English. But a great man once said, ‘life without Rascal House pizza is life lived in a cold and desolate place.’”

So I read the Rascal House menu that Ryan brought us from Cleveland. And I saw the joy and amazement in everyone’s eyes. So many different kinds of pizza and much more! We canceled Christmas and spent the next day traveling a straight line in 24 cars, making sure to stop off at rest stops along the way so I could read more tales from the Rascal House menu. I had never seen Ryan so happy. When we reached Cleveland, we were sad to learn that Rascal House was closed. For it was Christmas Day. We camped out in our cars on East 18th and facetimed each other, because no one could give the Rascal House menu a rest. When we ate at Rascal House the next day, questions bounced around in my head like pogo sticks on trampolines: How is it possible to have the world’s best burger and pizza in one place? How does Rascal House get their crust to taste like that? After Christmas break we all enrolled at Cleveland State because none of us could bear the thought of ever going home again. I am currently working on three master’s degrees.

If you think this story is extreme, you should try the Pepperoni Extreme at Rascal House. Rascal’s famous double-proof dough with more than a double-load of pepperoni goodness from crust to crust. Then share your holiday tales with us on Twitter or Instagram using #RascalHouse, or post on our Facebook page!