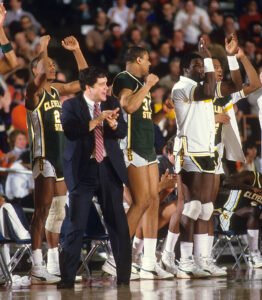 There are many things we like about March. Daylight Savings Time takes place on March 11th. Pi Day is March 14th. And who doesn’t love St. Patrick’s Day? But what we like most about March is that it sounds really good in a sentence. “This afternoon, I’m going to march right over to Rascal House to put an end to personal hunger.” That sounds neat, doesn’t it?

March also sounds funny when you use it in a joke.

“Hey, Phil! What do you call the NCAA Tournament without Rascal House pizza?”

“I don’t know, Mike. What do you call the NCAA Tournament without Rascal House pizza?

“Very funny, Mike. But scare me like that again and you’re out of the company pool!”

Before you get your brackets in a bunch, you should know by now that Rascal House and NCAA basketball go together like peanut butter & jelly, Hall & Oates and Bonnie & Clyde. After all, our hometown is the same hometown as one of the greatest Cinderella teams in tournament history. In fact, our old place on Euclid and 21st was “watch party central” when our CSU Vikings beat Indiana and St. Joes in the first two rounds of the 1986 NCAA Tournament.

We will always remember when students packed the tables at Rascal House, then poured out on to Euclid to celebrate after the Vikings made it to the Sweet 16. Who would’ve thought a little team with players named Mouse, Mudd and Ransey would beat the mighty Indiana Hoosiers, let alone go on to face Navy and fall just 1 point from making it to the Elite 8? Only dreamers and people who really believe in David and Goliath stories. But that’s what we love about our business. Small, neighborhood fast-casual dining that’s capable of doing extraordinary things. Being there with you when events like this elevate all of us to new heights.

32 NCAA Tournaments since 1986 have come and gone. And although Cleveland State has only been to the big dance one other time (2009), Rascal House has been, and will always be, a part of them all. At homes, offices, or wherever your watch party is!