Hey everyone, Rascal M here! November is National Blog Posting Month. I’ve written about a lot of things so far. Like our menu options that run deeper than the middle of Lake Erie. Month-long holidays that make your heart go pitter-patter like National Burger Month. And that interview I had with the Box Lunches was quite riveting. But today I want to go where no blogger has gone before. To Public Square to talk with statues.

I’ll finish my hot and delicious Philly Steak Grinder (succulent roast beef politely smothered with grilled mushrooms, onions and provolone cheese at 1836 Euclid Avenue) and head to Public Square. I’ll start with the guy who started it all: Moses Cleaveland.

Moses: Hello down there. What can I do for you young man?

He called me young man!

Me: Just wondering what it’s like being the guy who founded Cleveland?

Moses: I’m glad someone finally had the decency to strike up a conversation with me. Do you know how many people walk by me every day?

Me: I suppose a lot. So, what do you say? What’s it like being the founder of Cleveland?

Moses: Well, I have so many people to thank. The team of surveyors that came with me from Connecticut. Lorenzo Carter for sticking around when everyone else thought Cleaveland was a mosquito-infested swamp. The Irish and Germans who dug the canal that put Cleaveland on the map. Then you have the Van Sweringens who expanded Cleaveland’s rail system. I still have no idea why you guys dropped the A from my name. Thanks for the statue though.

Me: It’s a fine statue. And I think some newspaper along the way had to shorten your name to fit it on their masthead. That reminds me! What did Fonzie say when Richie Cunningham gave him a slice of Rascal House pizza?

Me: It was great talking with you, Moses. I’m going over there to talk to Mayor Johnson now.

Mayor Tom L. Johnson was the mayor of Cleveland from 1901-1909. Under his leadership Cleveland grew into a major industrial city. One with paved streets, parks, electricity, public transportation, steel and sporting facilities.

Me: I have so many things I want to ask you. But I only have time for one. Why are you sitting down? 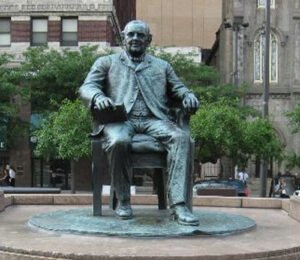 Tom Johnson: I guess it all began when I bit into a Rascal Burger. I was like, ‘Moses, I gotta sit down. He said, ‘Go right ahead, you did a lot for this city, if anyone deserves a break it’s you.’ I said, ‘No, it’s not that. This 100% pure beef half-pound burger from Rascal House is making my knees buckle. It’s an experience like no other!’

Me: Did you get it with cheese?

Me: Happens all the time. Hey, I’m going to go over there and talk to the soldiers. Nice chatting with you, Mr. Mayor!

Tom Johnson: You, too. Tell the boys I said hello.

Me: You can tell them yourself. They’re just right over there.

Soldiers and Sailors: ‘Can’t complain. How’s things over there, Tom?’

Tom Johnson: ‘Oh, you know. I got the pigeons and the Old Stone Church to keep me company. I’m sending a guy from Rascal House your way. Be nice to him, okay?’

Soldiers and Sailors: ‘Did you say Rascal House?’

As I head to the Soldiers and Sailors Monument, I can’t help but think of Cleveland’s Civil War history. All the brave men who fought to reclaim and preserve our nation all those years ago. Men who grew up not too far from where I’m standing. The Soldiers and Sailors Monument is one of Cleveland’s most important icons. It was dedicated on July 4th, 1894 to honor the men and boys from Cuyahoga County who contributed to the Union’s victory in our nation’s Civil War. Designer Levi Scofield didn’t skimp on detail. The monument features Infantry, Artillery, Naval and Cavalry groups. And high above stands Lady Liberty. She holds a shield bearing the word liberty in her left hand, a sword to protect freedom in her right.

Soldiers: Did you bring rations?

Me: No, something better.

Soldiers: What can be better than rations?

Me: Online ordering. You know, with a smartphone. I’m sure you’ve seen people walk by here with smartphones. And with online ordering at Rascal House you don’t have to leave your post. Just a few clicks and great food is on the way!

Me: Wouldn’t you rather have a dozen Bellybuster-sized Pepperoni Extreme pizzas?

Soldiers: Those words you speak…what in the name of Gettysburg do they mean?

Me: Each Bellybuster is 16 slices of original Rascal House pizza with aged pepperoni and provolone cheese on top. It’ll all make sense when you taste it. And don’t worry, I ordered enough for all of you. It’ll be here before you know it.

Soldiers: Will you be joining us?

Me: Sorry, I better be getting back to Rascal House. People are starting to stare.