How Well Do You Know Our Toppings?

It’s no secret we throw all sorts of toppings on our pizzas. Fresh meats, fresh veggies, three different kinds of cheese. But have you ever wondered what our toppings are really like? Sure, they make you the happiest people on the face of the earth. But you probably don’t know anything about their life experiences and how they became the toppings they are. Until now!

Pepperoni: What they say about me is true. I was voted Most Popular Topping in high school and I don’t take nuthin from nobody! Actually, I’m a pretty nice topping. I’m auditioning for the lead in a play about a Cleveland-based pizza place, a real hometown favorite!

Italian Sausage: I like Louis Prima, Goodfellas and opening up to people I just met. Oh, and my favorite baseball player was Rico Petrocelli. Not because I’m a Red Sox fan. I just like saying Rico Petrochelli! I highly recommend you team me up with pepperoni. We like to sit back and laugh when people fight over who gets to eat the last piece.

Ham: When I first came to Rascal House I didn’t know how everyone would take to me. You know, because of that story about green eggs and ham. Turns out, Rascal House doesn’t even sell green eggs. Besides, I taste great on pizza. Ask anyone!

Char-grilled Chicken: Let’s get a few things straight. I’m not going to do the chicken dance for you. I’m also not interested in why the chicken crossed the road. I just want to sit here and watch you imagine what I might taste like on top of Rascal House pizza. Okay, I think we’re done here.

Pure Beef Topping: I can trace my lineage back to 8000 BC. That’s when people started domesticating cattle for beef, milk and leather. When pizza was invented, we flipped a coin to see who got to go on top of it. I won, milk went with cheese, and leather made people like Fonzie cool.

Hickory Smoked Bacon: They say Rome wasn’t built in a day. Well, neither was I. I’m made from the finest, premium lean pork and slowly smoked with hickory wood. Why are you looking at me like that? I think you’re supposed to wait until I’m on top of pizza. Hey, Boss? Boss?

Anchovy: Hey, where you going? Let me talk. First of all, I’m pretty darn tasty. People have been putting me on pizza for 2000 years. I’m nostalgic. I’m savory. And I only get really salty when I hear someone say, “anything but anchovies.” My ultimate dream? That one day I’ll hear somebody say, “anything but pepperoni.”

Green Pepper: You didn’t hear it from me, but I’m the reason people love the Rascal House Deluxe so much. And the Veggie Supreme. And the Chicken Primavera. And the Pizza Milano. And the Super Deluxe. Making specialty pizza is my specialty.

Red Onion: You didn’t hear it from me, but I’m the reason people love the Rascal House Deluxe so much. What? Green Pepper is taking all the credit? Well, let him believe what he wants to believe if it makes him feel better. You and I know the truth, and that’s all that matters.

Banana Pepper: I’m a member of the chili pepper family. I’m loaded with vitamins and minerals. And, like a lot of other toppings, I taste great in salads and antipastos. Give me a try sometime. You know where to reach me.

Diced Tomato: When Rascal House came to me and said I was going to be a pizza topping, I said, “why not? I already taste great on salads. How hard could it be?” The other toppings took me under their wings and the rest is history.

Mushroom: Ask anyone and they’ll tell you I’m a fun guy. If I put a Kick Me sign on your back that means I like you. If I don’t put one on you I still like you, I just don’t know it yet. Where was I? Yeah, I like being a topping.

Artichoke Heart: What can I say? People heart artichoke hearts on their pizza.

Jalapeno Pepper: Is it just me, or is it hot in here? Sorry, I’ve been hanging around mushroom too much. Once you get to know me you’ll see I’m pretty mild compared to other hot peppers. Can you say 2,500 to 10,000 Scoville units? Just right for going on top of pizza!

Pineapple: When I say Hawaiian Luau, you say Pineapple. Hawaiian Luau. Okay, looks like you’re not familiar with that game. Fact is, without me the Hawaiian Luau would just be pizza with ham, hickory smoked bacon and cinnamon. Hey, that actually sounds good. Please don’t tell Rascal House, okay?

Kalamata Olive: Whoever invented white pizza I salute you. You gave me an opportunity to be on Pizza ala Greco, one of the most unique pizzas in Rascal House history. I’m so happy I think I’ll do The Running Man!

Provolone, Sharp Cheddar and Feta: Let’s start by clearing the air. No, we were never in a doo-wop band called The Three Cheeses. We didn’t open up for Fabian at the old Cleveland Arena on Euclid Avenue in ‘58. And the hit song “Why Must I Be A Cheesy Topping in Love” is a figment of your imagination. People love cheese on their pizza, so we hooked up with Rascal House to give everyone the cheesiest experience around. End of story.

Well, there you have it. Now that you know a little more about our toppings, what’ll it be today? 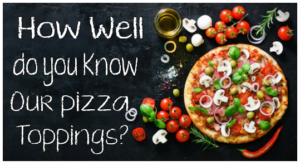